Soooooo I did a thing!! I participated in my FIRST EVER MOTORCYCLE RALLY!!! There were a lot of firsts this day!!

June 25, 2021 Hoagy’s Heroes Long Distance Riding Motorcycle Charity had its FIRST EVER MOTORCYCLE RALLY! And in true West Virginian nature it was titled “Not A Walk In The Park” which it revolved around 44 of West Virginia’s most beautiful parks!! Hoagy's Heroes 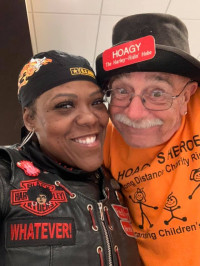 So here I am new to the whole notion of motorcycle rallies, like WHERE DO I EVEN BEGIN??! We were emailed the 44 locations and given their GPS coordinates ONLY like where is the address??? My iPhone doesn’t register coordinates!!! BUT AHAAAA Google Maps does!! Now I’m excited. I’m highlighting all the big money points like I got this, then I’m like I have no idea where I’m proximity these places are to each other….out comes the handy dandy map!! I printed several WV maps so I could plot the locations and draw my path from there…easier said than done!! AND TO SOLIDIFY that I was doing it right George Miller aka Mr. 3200 in less than 48 hours reached out to share what he had created which was a map of all the points!! So I was excited that I was in the right track!!

And anyone who knows me knows how competitive and yet indecisive I can be. Now I’ve created several routes but still know nothing about the areas or terrain!! That would have definitely helped me to make my decision. I pack up the bike to head to Hoagy‘a so I’ll be on time for the starting meeting and rally start. There were a few riders at Hoagy’s when I arrived. We laughed, talked, ate pizza and milled over this MAAAAAP!! Everyone was planning their great escapade!! One by one we begin to fall off. So I too turned in to get a nap and get ready for 12hours of uncertainty!! Lol. There were a total of 25 registrants and I later found out I was the only female!!! WOW!! Talk about pressure!!!

Time to start the meeting!! They threw some twists in there and bonus points options in too!! So now it’s time to get started. Where do I go?? I have two options. I put one in one phone and the other on the other phone. Eenie Meenie Minie Moo has never been so good to meeeee!! It chose the scenic route!!! I had such a good time riding, met quite a few interesting people, and had great conversations too. That’s what took some of my value time but I just love to talk!! I met a retired NYC Detective who also rode and we took selfies and he gave me a NY Harley chip!! I met a family at the train depot who loved motorcycles. I came across to elderly sisters from Jersey traveling to see all the parks and we actually played leap frog along the route unknowing to us we were going to the same places!!

Fast forward…you had to be back ON TIME or else lose 10 points for every 1 minute you were late up to 300 points or 30 minutes. And y’all know I’m a Last Minute Lucy!!! When I left my last stop my ETA back at the hotel was 10 minutes AFTER the scheduled time!!! Time to put on the jets Needless to say I made it back 6 minutes prior to designated time!!!

Matter of truth….what are the scores? Who is the winner?? The winner was Bill Karitis with like 2800 points! I came in 2nd with 2300 and Aaron Dearth and George Miller was 3rd and 4th!!