Sometime in early June I found out that Hoagy’s Heroes was holding its first-ever rally. Although I was late to the party, I reached out directly to Hoagy Carmichael hoping he would be able to find a way to squeeze me into the rally. Even though the 12-hour rally was limited to 30 participants, Hoagy’s response was, “Of course, brother… I will never turn anyone away!” 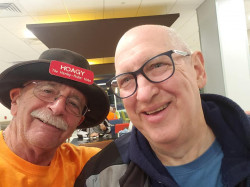 Time to get my motorcycle and mind ready to rally! I just finished the first ever Ride Around South Carolina Saddlesore on the Summer Solstice on June 20th, which left very little time to complete an oil change and rear tire change on my stead so I could head north to West Virginia on June 24th.

Hoagy’s wonderful spouse, Amy, sent an email a week before the rally with all the information needed. The rally rules, required waivers to be signed, logs for tracking checkpoints, and the actual rally book with bonus locations were all bundled in a single email. Given this was their first ever rally, I was impressed with the attention to detail. They covered everything including recommendations of places to stay, which is critical for participants that are not familiar with the area of the rally.

Thursday night I rolled into Glen Dale quickly learning it was the boyhood home of Brad Paisley. After unloading my gear, I headed over to Hoagy’s house where everyone was hanging out in the back with music playing, people laughing, and everyone talking about the rally while getting to know new friends. One thing I can tell you is, you will NEVER leave Hoagy’s house feeling unwelcome or hungry! That man loves to feed people and make them laugh. Several hours of camaraderie and it was time to get some sleep.

The riders’ meeting was at 5:15am on Friday. You could feel everyone was excited and a little apprehensive. There was lots of nervous chatter going on in the parking lot. Two last minute bonus opportunities were discussed that caused some more chuckles. The clock struck 6:00am and we were off!

I spent the next 12 hours riding through most of the western part of West Virginia with a lot of time riding along the Ohio River. The roads were magnificent, the views spectacular, and the bonuses were well-crafted to keep you on your toes while learning about the history and people of the great state. Most of the bonuses were as expected; however, some were certainly crafted to challenge you… or maybe satisfy a sadistic Rally Master? If you ever want to visit the grave of Captain “Devil Anse” Hatfield, I strongly suggest hiking boots, water, and a lunch. Don’t ask how I know!

At 5:45pm I was rolling back into the parking lot of the host hotel in Moundsville. I’m not sure how many miles I covered, but I will tell you I did everything I could not to get the 175 bonus points for keeping my driver’s license in a sealed envelope. The scoring was efficiently completed by Hoagy’s staff of volunteers. I think there were a few that wondered how I managed to score so many big point bonuses… I’ll never tell. Only one rider returned after 6pm, but only two minutes late resulting in just 20 penalty points.

Once everyone had been checked in and scored, we all went off for well-deserved showers followed by another rendezvous at Hoagy’s house. Hard to believe, but the mood was even more festive on Friday night and the Grill Master was busy feeding everyone from a menu that certainly was unique including hot eggs (be warned) and ramps, which are a West Virginia delicacy. All the riders shared stories of their 12-hour adventures, which resulted in much joking and laughter. Another successful night with no one feeling left out or hungry.

Saturday morning, we met at Hoagy’s and a group of nine riders took off to experience deep-fried cheeseburgers at the Deep Cut Tavern. The ride took us quickly to the restaurant for lunch followed by a leisurely ride back through some great curves and around Lake Seneca. The meal was just what I needed; however, it was poor planning on my part because of the banquet that was being prepared back in the barn.

By the time we got back to Hoagy’s there was one heck of a food spread ready for us. Some great BBQ including pulled pork and brisket, with some of the best homemade Mac & Cheese I’ve had in some time! We ate, laughed until our sides hurt, posed for a group photo followed by the distribution of ride certificates and awards. Even if I came in last place, I would still tell you this was an event that I thoroughly enjoyed. The people, the attitudes, the general feeling like you’ve known everyone your entire life… there is no substitute. Of course, I’d be lying if I said I didn’t enjoy coming in FIRST PLACE at the first ever rally sponsored by Hoagy’s Heroes.

In the end, a great time was had by all, plus we raised money for some worthy institutions that will help children in need… all while making new friends, new memories, and more stories to tell. I’m already planning to attend the 2nd… have to go for the repeat win! Regardless, if you’ve never met Hoagy, I strongly encourage you to do whatever it takes to meet him as soon as you can – he is the real deal. Everyone needs a Harley Hobo in their life!